The Division, a Love Letter

I recently hopped back into The Division 2, a game by Ubisoft after almost a 6 month break. Coming back and playing the game gave me an application for how much I really love the series from the standpoint of it’s settings, environments, atmosphere, sound and visuals.

The Division games are not perfect, they suffer from the same “Live Service’” bs that all games using that model have, undercooked at launch, limited content, too much grind. To me Destiny 2 wasn’t good until Forsaken, The Division 2 was the same until Warlords of New York came out.

The environments are in a word, amazing. The Division 1 is set in NYC during winter, there is snow everywhere, it reacts with the sun and blows around, snow storms can come in and reduce visibility to nothing. The Division 2 is set in Washington D.C. during the spring, there is water everywhere, rainstorms come and soak your Agent. In both games the attention to detail is astounding, I was watching a movie that featured the Air and Space museum in it and I could recognize the scene from the mission in The Division 2, like WHAT?

Unlike in Destiny 2, music isn’t always playing, it only comes in to hype up a fight, alert you of an encounter or a boss fight. Large portions of the game are without music, you can hear dogs barking in the distance, the sound of your character moving through the cities, brushing against a car door. The sound of wind or rain as your moving, your footsteps echoing through the nearly empty city. Although I am not a PvP player, one of my favorite zones are called Dark Zones, where you can engage in PvP, those zones are special, they are more muted, they feel oppressive in their atmosphere, the sense of a lack of, everything, pernitrates you as a player. You feel uneasy, jumpy as you move through them. The Warlords of New York expansion added some bits of those zones to the PvE space, so you can experience them without the risk of PvP.

I cannot tell you how many times I’ve just stopped actively interacting with my character and watched the environment in both games. The sunset or sunrise casting shadows down an empty, snow covered street in New York, or watching the wind blow around the national mall in D.C., the sun behind the Washington monument casting a huge shadow over the landscape.

I don’t want a Destiny 3, but I want a Division 3. Why? Because it’s a new place to explore and admire. Destiny is the same 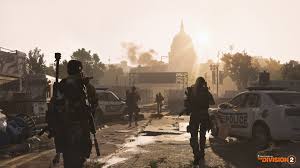 places over and over again a ‘reset’ there just makes it feel awful for the player having to regrind everything. But The Division? It’s a whole new city to explore. Imagine being sent to San Francisco, having to navigate flooding, collapsed bridges, Alcatraz being a stronghold you need to take back! Or in Las Vegas, without the grid the desert is reclaiming the strip, massive sandstorms block out your vision, the Luxor half covered in sand. Being set in Denver, dealing with snow and high altitude, the Rockies in the distance providing an epic backdrop and you having to get into the NORAD bunker in Colorado Springs to try and reconnect the United States to our allies around the globe. How about outside the US, you were part of a Division detachment in London when everything went down, and your working with the local government to restore their connection to the rest of the world. 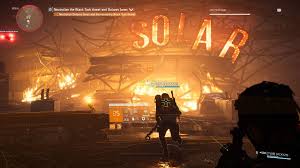 The Division 2 underperformed, which I think is due more to live service and looter-shooter fatigue more then anything. But I hope it did good enough for us to get a Division 3 in the future. With the current real life pandemic there is no way for them to travel to locations to get them into the game in a way that would meet the high standards of TD1 and TD2, but I really hope in the near future we are able to have Ubisoft, Massive and Red Storm transport us to a new location.

The Division series doesn’t have enough on-going content to be your one and only game, as maybe an MMO would be. But It’s a game you can hop into solo or with another person or a group and play through almost all of the content and just enjoy playing around with builds, overcoming challenges and enjoy being in the environment.