The Build of my Development VM\Docker Server

In my previous post I talked about why I’m building a home lab server, the goals and starting info I was using. In this post I’m going to detail what I eventually got, the build itself and any gotchya’s that I encountered during that process.

My goal is to be able to have 6 Azure medium sized VM’s (4 core, 16GB of RAM) up and running all the time. That will save me $1,000 per month based on Pay-As-You-Go pricing. With still having some headroom left over for the host and other infrastructure.

Immediately I need to support the following VMs:

Straight off the bat that’s 2 VM’s that would have cost me $330 a month. With the overall goal of adding up to 4 more. Resource allocation out of the gate will be:

So now that I have my first set of system requirements, the load I’ll be placing on the system, it’s time to start buying the parts. As much as I can, I’m trying to buy the parts new and I was able to for most of the system, outside the processors which I got on eBay. 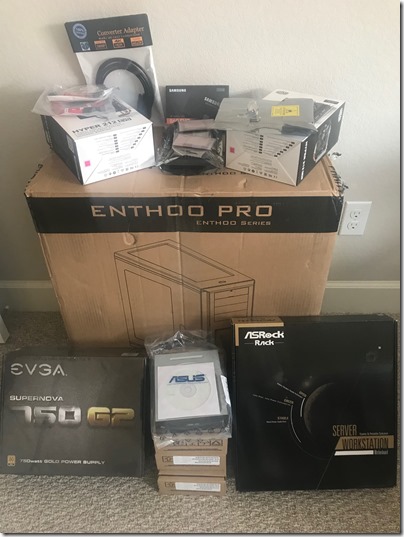 I also went expensive on the RAID HDD’s, opting for the faster WD Black Performance edition drives with 7200RPM and 128MB of Cache. Those HDD’s alone will turn into about 1/3 the systems overall cost. But that ensures that the VM’s and NAS will have fast access to the bulk of the storage on the system. You can save yourself a lot of money by going cheaper on the drives.

Some notes from this build: 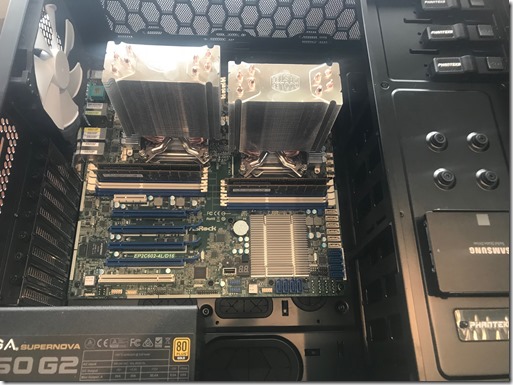 JP Toto’s excellent article on his build server (which I originally followed) has his out the door cost at $1,105 at 1/29/2017. But with the Crypto Mining frenzy, the prize on almost all components (CPU, RAM, PSU’s, Cooling, MB’s) have all risen. So keep an eye on prices to try and get better deals, you may have more luck at a local computer store getting good deals there as well.

If you’ve stumbled upon this article anytime in the future I highly recommend looking at V3, V4 or higher versions of the Xeon processes. With every version they get faster, more cores and more Cache. But you will need to buy DD4 RAM and a motherboard that supports that processor version, so just ensure you checking that compatibility. From what I read that ASRock MB that I bought will only support up to the v2 editions.