Today I’m going to review/test one of the licensing systems from the first post. The lucky system is Eziriz IntelliLock. I’ve decided to review one at a time because the posts were tending to get very long in some cases, so I’ve broken them out. If the post isn’t too large I’ll see about combining multiple reviews.

IntelliLock boasts a very polished user interface and an attractive feature set. The base product also include an basic managed code obfuscation system and a ILMerge system. IntelliLock also integrates with the Plimus e-commerce provider. 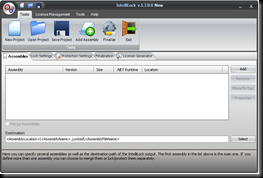 Unlike other licensing systems IntelliLock is an after the fact protection system and it wraps itself around the protected assemblies or executables, creating a little larger file. Which for the most part isn’t an issue. Also it a completely managed solution that seems to have been compiled with the “Any CPU’” mode in VS, which means the single protection can support x86 and x64 out of the box without an additional DLL.

The IntelliLock license is based on a .license file that is RSA encrypted that your users will place in the directory where your application is installed. Now this is my first issue, license files offer the best protection scheme out of any licensing model. First they can be encrypted better and hold more data then any reasonable license key and it’s more difficult to move and handle the file, which is my problem. Being a systems administrator in a past life I had to deal with license management and the licenses that required files were always the most pain in my butt. I had to store, backup and manage these files to ensure they could be used when needed and recoverable if there was a problem and don’t even get me started if there was also hand entered data, like a specific username and company that needed to be used with the file.

Because of my past problems with license files I never want to overuse them for any of my products. If I’m charging $250 or more I might consider it, but for products less then that I would be fine with a short and simple license key, even though standard license keys are the weakest form of licensing.

I downloaded and started playing with the trial of IntellilLock to see how the registration and trail screens work in a protected application. When I protected my assembly and tried to run it I was promoted with this following screen:

Clicking Ok just makes everything disappear, although it might be trying to show my app, but I see no interface nor do I get an error. So downloading the trial I’m unable to test and verify the whole licensing process or end to end flow. If this message box was shown first, then the normal trial or registration box that would be fine, but this isn’t testable at all.

Based on the options lock settings screen I’m making an assumption that the trial and registration screen is actually just a text box.

To me this isn’t the desired behavior, but it does appear to be somewhat configurable and you may be able to use the API to show a more attractive and custom interface. Although I’m interested in ‘out of the box’ licensing system and I don’t want to be calling a lot of API’s for what I consider default behavior.

Another thing I found interesting about IntelliLock was the License Management section and the tools provided. Unlike most other licensing systems IntelliLock can match licenses to customers and even activate/deactivate those licenses if needed.

Finally on the feature set I wanted to talk about the ASP.Net Management and Activation web services. This server support license generation via an e-commerce provider plus the license activation and tracking service. To me this is a vital out of the box requirement for licensing systems to have and setting up IntelliLock’s was extremely easy.

In addition to not being able to fully test the product I did some Googling and determined that EZIRIZ may have some communication issues with their customers and potential customers. Although I take forum and blog posts with a grain of salt I did try contacting EZIRIZ about some questions that I had with x64 compatibility, edition support and some others. Although I haven’t heard a response yet it hasn’t been long enough for me to be concerned.

Overall I liked the product, based on the following points, it’s price of $179.00 was attractive to me with all the available feature that IntelliLock had, it had built in ILMerge capabilities and even provided a basic managed code obfuscator. This means that for $179.00 you got a licensing system, customer tracking system, ILMerge system and a basic obfuscator, not bad. What I didn’t like was the ‘vibe’ I got from people who have used the company and complains about their extremely poor customer support and issues that IntelliLock might not be as compatible as it seems. Also the very simplistic and ‘cheep’ looking nag and trial screens were a little bit of a turn off.

UPDATE (6/23/2009): I have yet to hear back from EZIRIZ about my pre-sales question that I sent to [email protected], which was the email address in their application when I clicked the email link. From my experience if you don’t get any, or a good replay when your wanting to give them your money, it will be far worse when they already have it, such a shame.