In this the second (actually third) part of my testing out of Licensing Systems for the .Net Framework. Today I’m going to review/test one of the licensing systems from the first post. The lucky system is SeriousBit Ellipter. I’ve decided to review one at a time because the posts were tending to get very long in some cases, so I’ve broken them out. If the post isn’t too large I’ll see about combining multiple reviews.

After installing the product on my test VM I opened up the UI. My first impression is that it might be –too- simple, but I’ll take a spin around and see what I find. The key generation is fast I and I like the idea of a of a unique serial id. The key pattern is something I also like, it’s default is XXXXXX-XXXXXX-XXXXXX-XXXXXX-XXXXX (4 blocks of 6 and 1 block of 5). The standard Microsoft key of 5 blocks of 5 is my sweet spot and this one only adds 4 more (MS: 25, Ellipter: 29).

What I did notice when I opened up the UI was that there was not register screen, nag screen or trial box, it just opened. It wasn’t until I tried to validate a generated serial did I get a message box.

Perplexed I decided to check out the Help menu and found only three options. No documentation or help like stuff in the Help menu.

What about the FAQ, maybe it’s got some documentation, well a little bit. 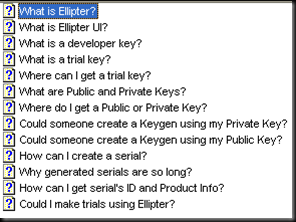 I decided to see what the “Enter Developer Key..” option contained so I opened up the page and noticed a couple of problems. 1.) “Or” seems to be misspelled and 2.) The label used for that text is covering up part of the key text box.

I hate being a nitpick and I’m sure every piece of software I have ever developed has UI issues worse then that, but this being a registration/license software I would assume that extra attention be paid to issues like this on the registration screen.

Now back to the serials that the system used, although just a bit long for me they do allow me to put in information like “Product Info” and an “Expire Date”. These are fairly nice features to have in a serial number, so I decided to test them out.

Here is a standard set of serials generated from Ellipter:

Now I’ve added my product information “My Prod 1.0”, which will be smaller then most real product names.

The size of the serial number almost doubled. This is something that a user should never have to type in by hand. As an ex System Administrator I can tell you that your customers will not always have copy and paste, and anything more then a Microsoft serial should throw up a flag for basic software. I would even venture to say that for most software the serial number should be half the size of a MS CD key.

Only three more characters then the last one, which isn’t too bad.

My overall review is that this is a extremely basic license key generator. There aren’t any of the features I really want in a licensing system and the key generated is a little be long for my tastes. It does provide functionality like registration, time and usage limits for trails and some other features but you have to code them yourself and use it’s API, to me that’s too much friction to do for each application I develop using the software. But it’s very functional system and had a price point that may make it attractive for people and companies on a budget.