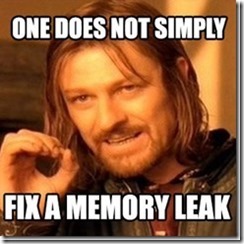 I like to design my API’s as stateless as possible and the Resgrid API’s are no different. They do a fair amount of business logic and work, but all the heavy stuff is all offloaded to backend workers, databases or Azure itself via the Service Bus. So this slow progressive rise in memory was troubling.

With work on moving Resgrid to App Services from Cloud Services I decided to run some JMeter tests against the API to see what was going on. After a bunch of read based operations tests, no memory leak. Then I analyzed what was occurring during the NewRelic alerts, there were a lot of sets.

I altered the JMeter tests and found this:

After the update, no more memory leak, and an inspection of the objects in memory reveals that no large service bus objects in the heap. So if your using the Azure Service Bus and experiencing memory leaks I highly recommend looking at your Microsoft.ServiceBus version.