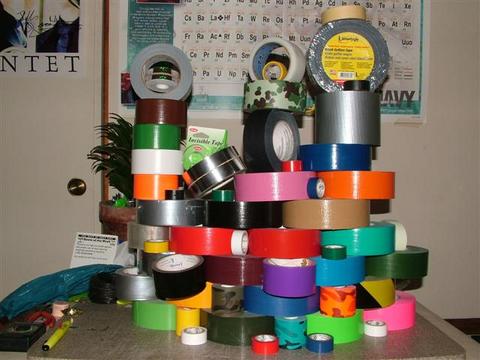 abstraction to complete a simple task, but to code it and ship it. It’s a good read and I recommend it. Uncle Bob also posted a rebuttal, which is a good read as well.

I like the feeling behind Joel’s post and I probably would consider myself a Duct Tape Programmer, but I don’t think I’m good looking enough. But I think Joel is just a little left of center with his post and it misses the mark on what we should be communicating to our fellow developers. I believe the message to developers should be that of moderation and not out right not doing.

Is an application with three layers of abstraction better then an application with none? Can you honestly answer that question? Does loosely coupling your application make it better then one that is tightly coupled? If you answered yes to that then your missing the whole point of software development. Software development is an art form and the patterns and practices that we employ in our field don’t always apply to every software application we build. Every piece of software we code is in a vacuum, and we need to apply the best tools for the job to complete the job well.

What I got out of Uncle Bob’s article is that I can develop bad applications without ‘complex’ tools like multi-threading and abstraction just as easily as I can with them. Just because I have to tool in my toolbox doesn’t make me included to use it, and we should be forced to. I’ve build some small tightly coupled applications that work great and haven’t failed or stopped working in years, does that make them bad?

There are some universal truths in our field though. I’m not a huge Unit Testing fan and I think people can go way overboard with it. But having some unit tests that exercise your code business logic is never a bad thing. But in crunch time will I cut unit tests or functionality? Probably unit tests, sorry boys and girls but unit tests aren’t a deliverable the vast majority of the time. But does that mean it’s ok never to do them just because they may be the first to be cut? No, never, never. I’m not a fan of TDD but it can be extremely useful and it just another tool in the box, like paired development.

I don’t think Joel is calling all non Duct Tape Developers stupid, but I think entering into a project with a rigid set of tools and patterns is, and so is the reverse. Don’t empty your tool box because you don’t like TDD or Unit Tests, but try to use them from time to time. Also don’t try and apply TDD and 100% code covered to an application that just emits “Hello World” to the console. Yes a lame example I know.

If you never try those things how will you know if they work? If you never try multi-threading and application or writing a few layers of abstraction can you expect to correctly identify where they will come in useful and how they will be useful? If you never tried TDD can you determine where and why it’s useful? Fill your toolbox with great tools, like Duct Table, but always remember to draw up a blue print to use them correctly.