Charter Cake (SpeedTest) is a Lie

My Charter Internet is a little, ok a lot, on the sick side. I know how to help the person I’m talking to at Charter’s wonderful technical support troubleshoot the problem, but them telling me I have to reinstalled my network drivers is taking the troubleshooting script a little too far. As a pleasant aside when I ask to be transferred to a supervisor and he started following the script and I mentioned that to him he got hurt and scolded me, I guess they don’t like me talking ill of their skills, err, trouble shooting system.

After an hour of the phone with them they asked me to go to their speed testing site to test my download numbers. Lets see if you can spot the issue, one is Charters speed testing site and the other is my tried and true favorite SpeedTest.net. 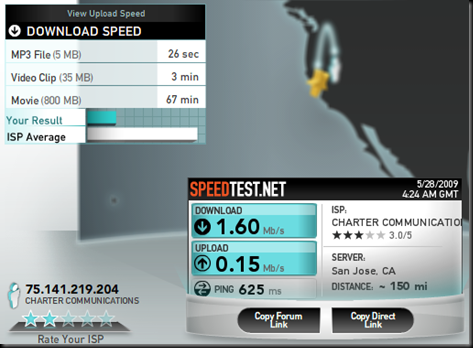 Can you spot the problem with Charters speed test, here let me give you some pings at the same time, in case you can’t figure it out.

That’s right folks, their speed test servers is placed smack dab next to your house, on Charters OWN NETWORK. Now I wouldn’t have an issue with this if I was paying Charter Internet for a network connection to their own network, but I pay them for a working connection to the Internet with speeds at about 80% of that advertised.

What happened when I tried another one of Charters speed tests, this time to another point in their own network…

So in case someone from Charter is reading this, the problem isn’t with my router, computers, OS, firewall, NIC drivers, non-safemode’ness, LAN/WLAN or the server I’m talking to. The problem isn’t even with my cable model (hint that’s why the Charter speeds were so good) no the issue is with my/charters connection to their upstream provider. I’m either going through a bad switch or router, someone in Charters network there is a bad link or cable or an issue with the upstream connection.

There Charter, I did the trouble shooting for you, now get it fixed!

2 thoughts on “Charter Cake (SpeedTest) is a Lie”