Wing Commander IV: The Price of Freedom is one of my all time favorite games. A friend of mine had Wing Commander 2 and that what my first introduction to the series and genre at large. When I finally got my own computer this was one of the first games I owned and I played it a lot. 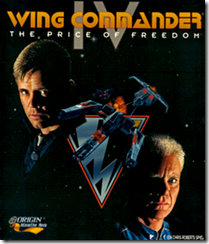 Up until a few years ago I felt that we would never see games like that again. The Space Sim was pretty much dead as a genre. I played the X series from Egosoft (bought every one since X2) and I tried to get into EVE Online.

But as much as I loved the series I never really knew who Chris Roberts was. I was pretty young and just consumed the games rather then getting attached to their creators/publishers.

So when I heard about Star Citizen I was totally blown away. I missed the original Kickstarter but I was excited that I could still help crowd fund the game. But I was a little turned off by the prices of some of the packages, $15,000 bucks? Started to feel a little pay-to-win’ish for me. So I’ve been holding off until more reviews of Squadron 42 make it out there.

I’m also a fan of The Escapist, I watch Zero Punctuation every week and cruise their site from time to time. So when I started seeing YouTube videos with both Star Citizen and The Escapist in the title it peaked my attention. So I started watching and reading and wow, just wow.

There’s a lot floating out there, but it comes down to people are concerned that they game proposed cannot be delivered. Derek Smart seems to be the most vocal, he’s raised some good points. But he’s also a competitor, what better way to raise visibility of his own stuff and tear down the competition at the same time, so that should be taken with a grain of salt. But it doesn’t mean he’s wrong. There is a lot of “your either with us or against us” attitude out there, which isn’t healthy or constructive.

Star Citizen has raised around $90 million. There is a lot to the proposed game, which according to the developers is many AAA games in one. If that’s the case it’s pretty scary, why? Well AAA games are expensive, lets take a look at GTA 4’s estimated development costs, they were $100 million. According to the Star Citizen website they have 3 more large modules to build, if each one is a AAA title, that’s $300 million using GTA 4’s numbers, which is a worst case scenario, but things are trending that direction for the industry.

This doesn’t include the costs of what they have already built and the cost of starting a company from scratch. Other development studios, like Rockstar, already have all the infrastructure, processes, tech stack, etc in place Cloud Imperium Games had to build their up. So with the money already committed it’s already an uphill battle to reach their goal.

Just from a high level numbers view it’s very difficult to see how they will complete the game. But if they deliver Squadron 42 with the money raised thus far and with everything already delivered I would call it a success.

If The Escapist and Derek Smart are correct and that $90 million isn’t being utilized properly or efficiently that compounds the issue. Hiring and firing are expensive, so even though they are streamlining operations now it’s not cheap. Some people are happy that CIG is going to sue The Escapist? Why? Now your money is going to fund a legal operation, it would be far cheaper to hire an external auditor and just put the issue to bed.

Can Star Citizen complete the game promised with the money already brought in or are they banking on constant stream of income?

For any developer, game or otherwise, this is nothing new. It shouldn’t be used as a shield for not being able to deliver. Let take, for example, a game is going to cost $1.2 million to make a it’s deliver date is a year out. Your burn rate is $100,000 per month. Now say they have a stretch goal that costs $600,000 more, it’s reasonable to assume that the game will now take a year and a half (assuming a consistent burn & production rate).

This is overly simplistic, but you have 2 options you take more time or increase your production capacity. But if you take more time you limited by your fixed costs, i.e. rent, salaries, etc. So to make the $600,000 exceed 6 months (assuming a $100,000/mo burn rate) you have to decrease that burn rate.

My understanding is that the original game was targeted for November 2014 (almost a year ago), But that would most likely have been for the original scope of the Kickstarter, not all the screech goals. So it’s understandable that the game is taking longer. My opinion is that it’s better to take longer then staff up and try and get it done quicker or on time. Adding more people doesn’t always make things go faster.

Many point to the fact that they are laying people off as a sign that they are running out of money. This isn’t always the case. Can it be a sign of belt tightening, you betcha, but it could also be removing redundant positions and aligning with goals. But there is a major risk here, when a fair amount of your co-workers start getting the axe you faith will be shaken. You will update your resume, start responding to head hunters and maybe take interviews. You may stop giving 100% to your job and you most definitely will be distracted.

It’s always better to not hire then to hire and fire. It’s expensive on both end and if your doing en-masse it a drain on the emotional stability of the people in the company.

Overall it’s a great time for space sim fans, we have Elite Dangerous, Angles Fall First, No Man’s Sky and Star Citizen. But if Star Citizen implode it make break the already shaky faith in crowed funding of games. So here’s hoping it won’t fail. I’m looking forward to playing Star Citizen with Squadron 42 comes out, in the mean time I’m enjoying Elite Dangerous and buying Angles Fall First on Steam Early access. Oh and playing No Man’s Sky whenever that comes out.