Kicking the can down the road

Being a developer is an interesting profession. On one hand there are an engineering feel to it but on the other hand it’s far more like art. For me calling myself a “Software Engineer” is more for marketing then anything else. But lets face it, little of what developers/programmers do is actual engineering. 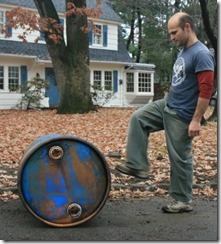 Engineers are certified go through an apprenticeship process then design and create things in the real world that, for the most part, have to stand the test of time. To me Electrical, Mechanical, Structural, etc are the real engineers and us developers haven’t yet earned that right to use that title in the way we do.

How often in a development meeting do we sit there, talk about a design/architecture/code flaw that could cause issues down the road but decide to not even begin to address it? It happens so often we have an industry term for it “Tech Debt”. Can you imagine some structural engineer’s having the same discussion?

Mike: “Nice, but looking at these designs if we have the amount of traffic we estimate, and we fully expect the bridge to be popular in the near future, it will start leaning to one side”

Tom: “Yea, but we have a deadline, we can always go back and add more supports latter”

Eventually all that Tech Debt will catch up to you and when it does, it can cost you business, alienate customers, hurt your image or even cause your company to fail. I’ve talked about this problem before and at Resgrid I try and follow a 60/40 approach. 60% new features/customer facing bugs, 40% tech debt, testing, automation and tooling.

Here are some guidelines I feel will help stop us from kicking cans down the road and start turning developers into engineers.

We have to balance getting features out or getting the product out with all of the ‘back of the house’ concerns. But we have to remember that we spend our days in the ‘back of the house’. If the architecture it’s good, code isn’t well formed or meets standards, patterns and practices aren’t being followed it’s only going to slow development down, cause bugs and arguments.