I haven’t been an “Apple” person for long, but since I bought my first MacBook Pro in early 2013 I was really impressed with the quality of the hardware, the feel of the device, how small and lightweight it was was light-years ahead of any other laptop I could buy at the time. The MBP turned into my travel laptop of choice, I had 2 Windows laptops (1 from Dell the other from Asus) that I just stopped using and gave away. A .Net Developer only traveling with a Mac, that was crazy talk. 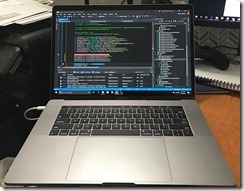 Fast forward, 3 freaking years without a meaningful hardware upgrade, and were now in 2016 and a new MacBook Pro has been announced. It’s a significant hardware upgrade over my 3 1/2 year old MBP, but not so much if you have a kitted out version of the last revision.

As I started to write this I’ve been using it off and on for a couple of days into my 10 day stress test, so not really stressing it yet. But I’ve already noticed a few things.

I’ve never before considered returning an Apple product, but after a day of use I looked up their return policies. Including taxes I spent $3,300 on the laptop and tack on another $400 for Apple Care. I still don’t know if I’m going to keep the new MBP, I’m seriously considering a Surface Book or Razor Blade as alternatives and keeping my old MBP for XCode builds.